A day to remember and then another one 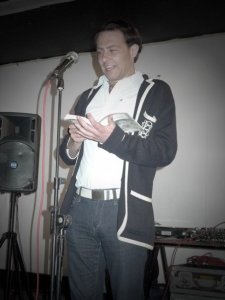 I feel and look like the hedge backwards, because I’m worth it, no, I mean but it was worth it.

It started on Thursday, when I was invited to – the amazing gallery that is – Amuti 23 on Cecil Court  so that I could see and hold, for the first time, a copy of my début novel.

The usual suspects present for the occasion were: my personal saviour – the owner of Amuti 23 and To Hell – Laurence Johns; the heaven-sent editor, mentor and now firm friend Lucy Owen, her brilliant and charming actor husband Tom Godwin (plus his also brilliant actor father Christopher), my PR salvation and mistress of wit Emma Young, the To Hell stalwart Jeremy Reed, with his ever-flowing pen in hand, and the Amuti 23 antiquarian fountain of knowledge that belies his years, Jonathan McNamara.

I had thought I’d jump for joy, but I was so excited I think I froze and stared.  I had no words at my disposal – which is a first – and did not compute – which is by no means a first.  So I blushed, rushed to the pub, downed two glasses of champagne and went to check on my mother who was in my flat. Then I sneaked back out to meet Lucy, Emma and Laurence at Blacks. They were reclining in very good company (Lee Brackstone and Lisa India Baker from Faber, Cathryn Summerhayes from William Morris , and Joe Pickering from Penguin). And I helped them sink several bottles of wine and grinned like the happily damned.

After another check on mother, I joined them again for more booze and some karaoke denial, before we headed back to mine. I then clattered into the room my ma was staying in and woke her up to apologise about the noise I was about to make, and then – true to my word – proceeded to make a lot of noise for several hours together and drink enough to kill a pony.

I think the reality of ‘dream come true, no really it has’, finally hit me whilst I was brushing my teeth after everyone had left.  My leg gave way (I was pretty legless) and I fell head-first into the bath.  Only my foot decided to stay where it was, so I sprained my ankle.  And I didn’t care.  Now every time I wince when I put weight on my foot, I’m reminded that I have my book in print and the pain is fortifying.

Sunday was the launch of To Hell, their Awards and the launch of The Cuckoo Boy another momentous occasion for me.  And what was both thrilling and anxious-making was the fact that a) I would be giving a reading, but also b) I would be reading alongside the Literary Glitterati… Andrew O’Hagan,

DBC Pierre and Hanif Kureishi. I was nearly sick in my hand. 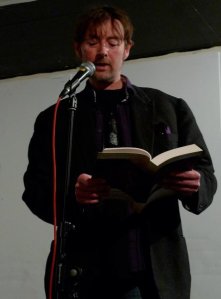 But my friends, who have always been my salvation and my constant delight, rallied in true form.  So many people rocked up I was entirely bewildered and felt like a groom at a wedding he hadn’t planned.  I simply didn’t have enough time to speak to anyone and most things I said were utter gibberish.  A few near and very dear – Ben Leahy, Jon Levene and Karey Fisher – were prevented by volcanoes and family illness but everyone else it seemed was there, including the divine Rachel Pickup, whom the volcano had delivered by preventing her trip to America.

The party was held in The Old Dairy in Bloomsbury, a real find once you’ve actually managed to find it. And from what I remember a thoroughly splendid night was had by all. The readings were marvellous. The drinks were free. I signed books, which made me feel terribly grown up and at the same time like someone posturing as a grown up. It was all too exciting. And I probably was sick in my hand, or maybe a bit in my mouth, but I swallowed it.

Then the party went on to mine again. Did I mention I have a bar? I think I did. My favourite image of the night was seeing my mother talking at DBC Pierre. I have no idea what words were exchanged, but I can imagine. (Yes, one of my literary heroes, DBC Pierre, actually in my flat, thanks to the aforementioned Lee Brackstone, in my flat, in my flat – to be said like ‘in your face’). I think the evening ended around 5am, when every drop of moisture had been drained from every last drinking receptacle.

Next the Canongate party. I don’t want this merry-go-round to stop.

One response to “A day to remember and then another one”